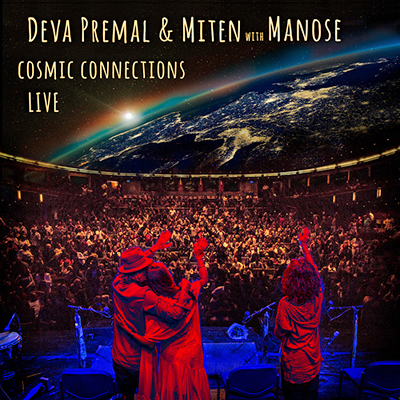 Cosmic Connections–Live was recorded by Deva Premal & Miten with Manose during their 2014-15 World Tour, and offers an opportunity to experience the transcendent energy of their live concerts.

The album begins and ends with Deva’s haunting rendition of the timeless and mysterious mantra OM (Deva & Miten call it the ‘Cosmic Yes’) and what lies between is an enchanting journey into mystic realms.

The trio are joined on this inspired collection of mantra and song by a roster of master musicians, notably Joby Baker [bass/percussion/vocals] and Spencer Cozens [piano/keyboards], as well as their concert audiences in Budapest, Frankfurt, Edmonton, Bath and Amsterdam.

Deva & Miten see their music as an invitation to take a break from the turbulence of our troubled times and open into a space of inner peace and meditation. This new release is another beautiful bridge to cosmic connections.

“Cosmic Connections Live is one of the most perfect nighttime albums I’ve ever heard, dreamy and sidereal while perpetually well grounded, a confabulation which beckons the listener to sigh, smile, relax, drift off, dream, and be free of Earthly concerns, of the travails of bodily existence and metropolitan madness, to glimpse the true estate of life rarely even so much as pondered on this planet, let alone lived.” -Mark Tucker, Veritas Vampirus, May 2016 (Full review here)

“SO pristine…. Cosmic Connections Live features powerful and reverent interpretations of sacred mantras blended with Western and Eastern-influenced musicality…. Fans will recognize the bansuri flute of frequent collaborator Manose, whose playing rises above, melds into, and dances around Deva’s angelic vocals; Miten’s deeply informed guitar playing; the masterful piano and keyboards of Spencer Cozens; and Joby Baker’s spacious bass and percussion…. A strong, diverse live collection that will be a treat for new and loyal fans alike.” – Joe Kara, LA Yoga, June 2016

“Deva Premal and Miten are a firm fixture on the spiritual music scene. For more than 20 years the German/British couple have been thrilling audiences with their ethereal sung mantras. Now also featuring the Nepalese flautist Manose, the trio present their “Cosmic Connections Live” concert album that was recorded on their recent world tour. Alongside traditional mantras with a contemporary trance twist, Deva Premal and Miten surprise the listener with moving pop ballads such as “White Cloud White Swan” or “Native Son”. On these we see above all Miten emerging as a singer from his partner’s shadow. The songs are wonderfully instrumented not only with Manose’s fine bansuri, but also piano, bass and percussion. For example, listeners will be moved by the ethereal “Mangalam” with a swaying Kirtan choir and gentle tribal beats as well as “Native Son”, which is dedicated to the children of the world, right through to the final two minute OM. Conclusion: An intimate live album that wins the listener over with a whole array of spiritual sounds.”
-Verena Revoers, Yoga Germany