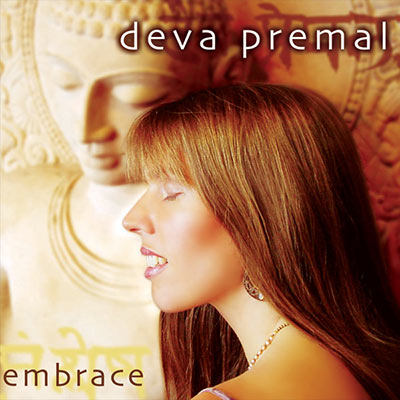 Embrace finds this best-selling singer at the height of her art, expressing the ancient wisdom of mantra through a contemporary musical vision.

“The high chanteuse of chant, Deva, is a pillar of originality in the grand garden of Indian music. You might say she’s to Sanskrit Mantras what Enya is to Celtic music. Her smooth soulful voice, which resides in the lower octaves, haunts atmospheric, lightly rhythmic, ethereal soundscapes skillfully crafted by her partner Miten. Together they take listeners on a journey into the depths of the soul that doesn’t forget to stop at the heart. The music’s easy on the ears, spiritually provocative and contains enough mass appeal to make even the yoga-phobic stir. Throw in a duet with Jai Uttal (Om Ram Ramaya) and you have an album that will get anyone’s chakras in an uproar.” –Music Design In Review

“One can take blissful refuge in the luxurious East-West mix… and gorgeously rendered mantras.” –Yoga Journal