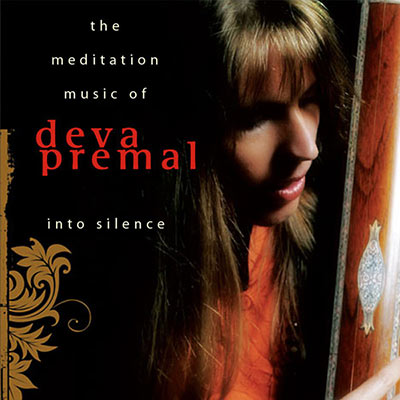 Into Silence, released by Sounds True, offers a soothing compilation of some of Deva’s most meditative chants & mantras to help you “awaken the longing in your heart amidst the blessed space of silence.”

“Devotees of the German-born New Age singer Deva Premal will relish this alluring compilation of some of her most sensitive mantra chants. Particularly moving is her achingly pure soprano in Om Hraum Mitraya (May the light of friendship shine), an ancient Sanskrit mantra celebrating the 12 spiritual gifts of the sun, which include illumination, healing abilities, and spiritual magnetism….” -Benjamin Ivy, Spirituality & Health, 2008

“Chanting is a devotional tool that can transform our consciousness by triggering associations and tapping the power of entrainment, breath, and intent. It is an ingredient in Christian, Jewish, Buddhist, Native American, Hindu, African, and Goddess/Earth traditions. Deva Premal has released 14 albums with her partner, Miten. She is a classically trained singer and musician known around the world for her elegant and serene sacred chants. She was raised in a German home where Eastern spirituality was practiced. She was chanting the Gayatri Mantra by age five and has meditated throughout her life. This collection of nine meditative works brings together her best sacred chants…. These songs are sonic containers for prayer….”