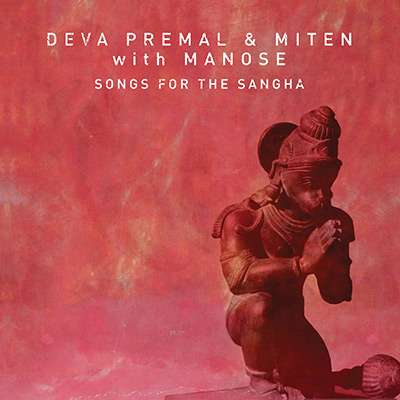 Songs for the Sangha offers a loving invitation to move from the daily rush of “doing” into deeper realms of simply “being.” Play it driving to work, play it cooking dinner, play it in your yoga studio, in the bedroom, or in your ear buds as you walk down city streets.

The music is there to support and entice – as the beautiful Rumi poem featured in the final track says, “Draw near, draw near and I will whisper in your ear, the name whose radiance makes the spheres to dance. OM…”

“Deva Premal remains the one all others are measured by in sacred music circles. Deva’s ethereal, velvety voice brings a warm embrace to the venerable chants; that unmistakable voice has carried these healing sounds into hearts worldwide for over two two decades. Miten offers beautiful, often bluesy songs composed with a depth of feeling and maturity, while Manose’s exquisite bansuri flutes carry from his native Nepal breezes that shimmer throughout the album. Meanwhile, Canada’s Grammy-nominated bassist Joby Baker and English pianist co-create unique soundscapes, moving from Western classical piano to swampy reggae grooves with rich jazz and soul inflections. Songs for the Sangha is a proverbial magic carpet ride….” –Lloyd Barde, Common Ground