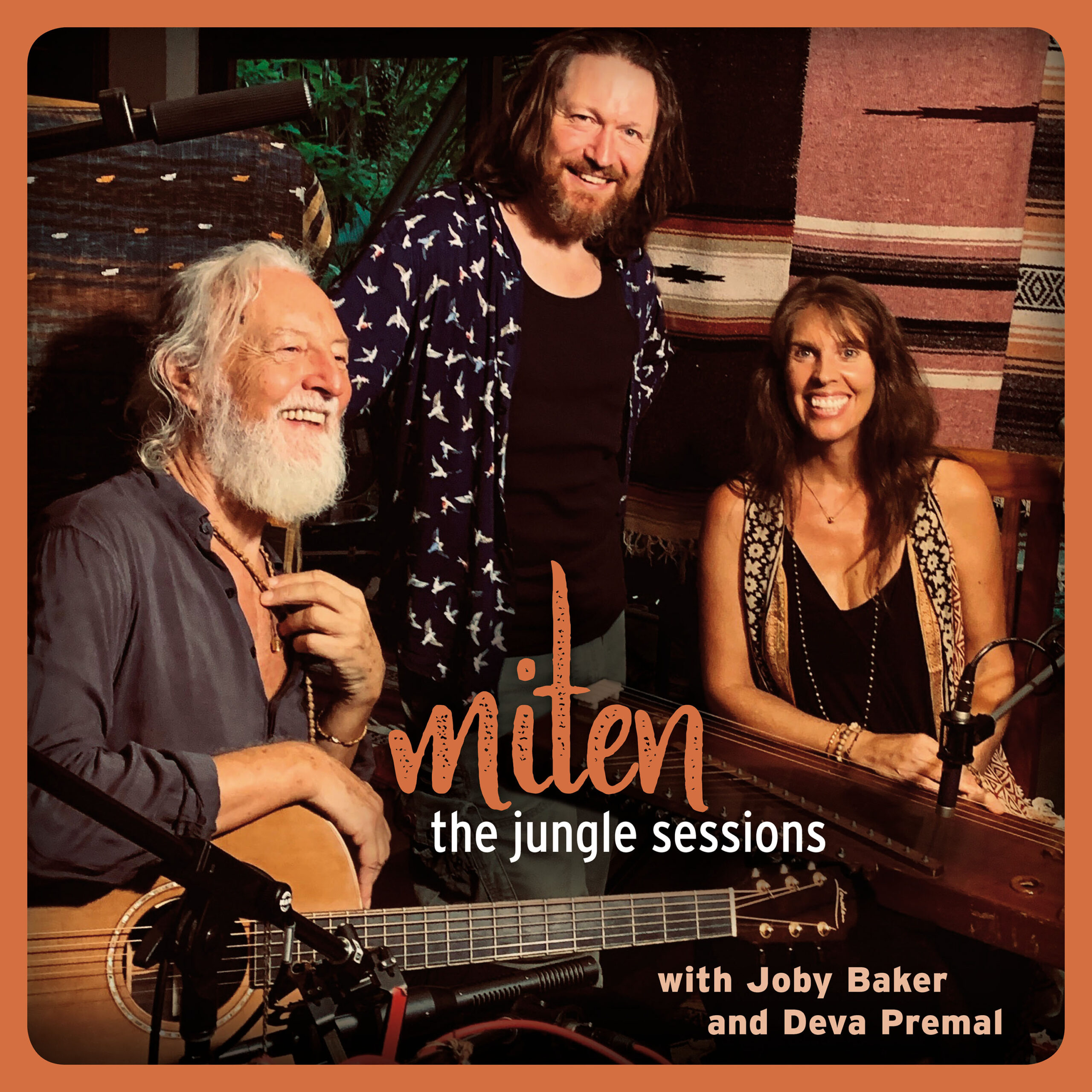 The Jungle Sessions is a work of joy and reverence written and recorded in lockdown by Miten during his extended stay in Costa Rica.

Rich in melodic, rhythmic and lyrical detail, the songs are inspired by the warmth and spirit of a place where the troubles of the world are soothed by the magic of nature and the eternal power of music.

What People Are Saying

Alan di Perna (Author, Music Journalist Rolling Stone, Billboard): “Experiencing the music on The Jungle Sessions is like being immersed into an easygoing tropical idyll—warm, convivial, relaxing. It’s the perfect balm for our troubled, uncertain times. The best kind of balm, actually, for the respite it offers is one of mindful awareness—a musical celebration of life’s joy and beauty written during a period of pandemic lockdown.” Read the full review here.

GuruGanesha Singh: “I LOVE this album so much….. so real, down to earth and at the same time so deeply spiritual!!”

Gurmukh: “I can’t stop playing your beautiful song. The instrumental background is divine!
We are holding the space of Love and Light on this Planet Earth.”

“Just downloaded on Spotify. Thanks for all you do and these marvellous songs.”

“OH my goodness whadda delight!!! My heart is lifted and I’m all California smiles (in all this absurd chaos).”

“Thank you Miten for the positive vibes and inspiration.”

“Lovely album ❤ listening now with the deepest gratitude for this gift of music to us all! Thank you Miten & Deva for being here on Earth spreading your beautiful, uplifting, loving energies. Your music is in my life everyday! It is like a fresh waterfall of connection and spirit.”

“So happy to be listening to this now on Spotify! I feel like we are all part of Rain of Blessings!”

“This is absolutely wonderful. Downloaded from Spotify to enjoy for many years to come and remind me of the love and support you gave us all throughout our times in sacred isolation.”

“For sure it lifts my spirit and brings a smile to my (troubled) heart!!”

“Namaste, the album was fabulous. I found it uplifting and high energy. I sang and I danced. My soul enjoyed it. Thanks for sharing Miten and keep up the great work.”

“I love your music and The Jungle Sessions songs have a “perfume” of the peace and joy you experience there.”

“LOVING it …playing it regularly…particularly when I’m feeling “I NEED a Beach”.

“Thank you for sharing this and for creating more music that is a balm that soothes my soul.”

“I LOVE to read every word about the songs – the lyrics, the credits, the pictures. I bought this as soon as it was available and it is already a big treasure.”

“I love this album so much and am eternally grateful for the music you keep creating Miten and tribe.”

“Absolutely love it!!! It has such a smooth and soulful feel to it.”

“Oh, sooo great, thank you! So beautiful ❤, reminds me of all the Joy and Hope and Love you brought us all these many months!”

“What an amazing artistic and spiritual accomplishment during a time when many have been discouraged from reaching out in this transforming world 🌎 of ours. Such a tribute to the strength of your intention to be a blessing to so many.”

“The perfect ambience music for dancing and embracing life!”

“It holds and enriches my heart and soul.”

“No words spoken..only bliss in my ♡ while listening the jungle sound & awakenings.”

“Amazing album ❣ It is so healing, full of love and light❣️☀️ every time I listen to it, I just become happier and full of love.”

“I so love the jungle sessions album. My heart swoons the love song to Deva.”

“Soo uplifting 🙏🏽 Loving the stories and feelings behind the songs. I’ve been singing and dancing with you.”

“I’ve been waiting a long time for someone to write some great music for these times – Thank you! Let the beat live on and bring Light to all!”

“I am so happy you put both versions of Rain of Blessings on the new jungle album… We love it … More is MORE !!!”

“Magnificent music, transparent, grooving, light, heart-warming, made tears come into my eyes, thank you for sharing your experiences, Miten.”

“Beautiful music for the soul! Thank you Miten, Deva and Joby for sharing your gifts with the world. Blessings to you!”

“Listening to you makes everything feel smooth and calm.”

“The Songs are amazing. It’s moving me deep in so many ways. Tears of joy and light, Lächeln, fun, deep deep Berührung to feel the divine power die Göttlichkeit.”

“I just love this groove.”

“There are no words to express what you made me feel today listening to all of this. Connection, blessings, feelings, awakenings ,insights and hope more and more blessings like this.”

“Miten, with your up-Lifting Musik, you give me the Sense of Life.”

About The Jungle Sessions

THE JUNGLE SESSIONS is the third in a trilogy of albums which began with the 2016 release, Temple at Midnight, which hit #1 on Amazon and iTunes world music and new age charts.
Miten followed this with his acclaimed Devotee album, released in 2019, co-produced with Joby Baker and featuring life partner, Grammy nominee Deva Premal.

THE JUNGLE SESSIONS is a record of Miten’s extended stay with his musical and life partner Deva Premal in a jungle hideaway in Costa Rica.

A place of harmony and natural wonders, Costa Rica sits in the centre of the world, sandwiched between the two largest oceans and the vast land masses of North and South America.

Miten and Deva had been regular visitors for 20 years and were hosting a retreat at the Blue Spirit Retreat Centre on the Northern Pacific coast when the worldwide C-19 pandemic began in 2020. With their touring itinerary on hold, the nomadic couple decided, for once, to stay put.

“We have lived a nomadic life ever since we met 30 years ago, so not travelling led us to look at life from a different perspective,” Miten says. A key moment, which inspired the single ‘Rain Of Blessings/Ra Ma Da Sa’, came during an online meditation session when a torrential, subtropical downpour suddenly descended on the gathering. “The song appeared in the rain, into my guitar and into our voices,” Miten says. “It was a magical, spontaneous celebration of communal participation.”

THE JUNGLE SESSIONS was mainly recorded in the El Silencio meditation room at Blue Spirit, where Miten was joined by his longstanding production collaborator Joby Baker from Victoria, BC along with life partner, Deva Premal. Together, the trio capture the spirit of a freedom where the troubles of the world are placed on the back-burner by the magic of music, meditation and by the immersion into nature.

Running throughout the album like a golden thread is the power of a life well lived, in Love, contemplation and meditation.
A wandering spirit, Miten has been on the road with Deva since the 1990’s, when the couple left the ashram of the mystic Osho in India and began responding to invitations from around the world.

THE JUNGLE SESSIONS is the latest staging post on this long, hallowed journey and resonates with a profound sense of time and place.