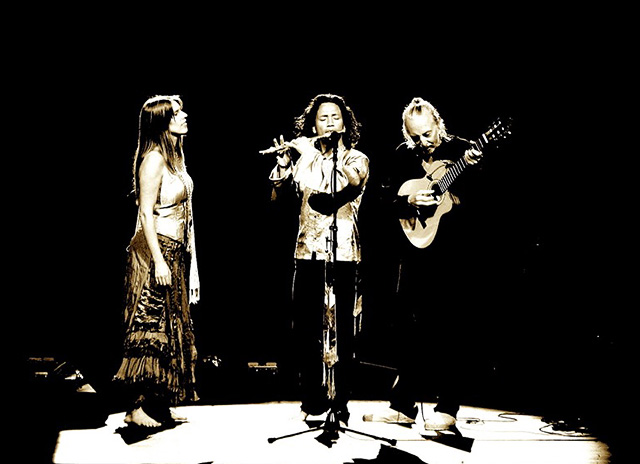 On the back of their latest release, Songs for the Sangha, which rocked to #1 on the iTunes and Amazon World Music charts, Deva Premal & Miten will be sharing the magic of Sanskrit mantra throughout Europe this autumn.

From Finland to Croatia, from the Ukraine to Israel, from the Czech Republic to Romania, their touring schedule has them performing in 24 countries during 2015, many in Eastern Europe for the first time.

Accompanied by Nepalese bansuri maestro Manose, the world-renowned chant masters will be introducing new music from Songs for the Sangha along with concert favourites, including the Gayatri Mantra and the OM Tare Mantra (a beautiful Tibetan mantra and a favourite of HH Dalai Lama).

These multi-dimendional musicians will feature up-close and personal the transformative healing power of communal chant and the profound moments of meditation that transpire. Responding to requests from the audience, while passing on in-depth information on the nature of their ancient Sanskrit mantras, they create an uplifting, intimate and inspirational evening to nurture the soul. No wonder a recent attendee referred to the concerts as ‘soul food’.

Deva Premal’s first album, The Essence, kick-started a worldwide chant movement and a new musical genre. As the ever-expanding yoga scene plays DJ to their success, the duo’s chilled-out, mystical music is played around the planet, resulting in album sales well exceeding one million.

Deva and Miten have also recently witnessed the mantras taking flight into cyberspace, with over 200,000 people participating in their 21-day online Mantra Meditation programs, and over 145,000 joining their recent chant on Facebook to celebrate HH Dalai Lama’s birthday.

Miten: “The music Deva and I make is born out of a committed spiritual practice. We meditate – we investigate – and our music is a result of that experience. It’s more a case of life and death than entertainment.”

CHER: “The Essence by Deva Premal is my all-time favorite album for yoga.”

ANTHONY ROBBINS: “Songs for the Inner Lover by Miten is a passionate and powerful work of art.”

HH DALAI LAMA: (after Deva & Miten played for him at a private audience) “Beautiful, beautiful music…!”

SAN QUENTIN PRISON INMATE: (after a concert by Deva & Miten and band at San Quentin Prison) “I’ve been in here 25 years, but tonight, after this concert, I’m free…”