Update From The Gayatri Fund For Nepal 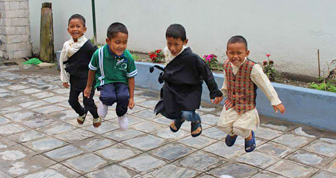 Hi friends, here’s a detailed report from Nepal on how the money that so many of you generously donated to the Gayatri Fund has been spent in the last few months: http://www.gofundme.com/Gayatri-Fund.

Eva Holmberg Tedert, founder of the Society for Street Children in Nepal, writes that “After the quakes most important was to make sure earthquake victims in cities and in remote villages alike got food and clean water to survive. The second priority was to give shelter, and we provided people with tarps, tents and also sheets of tin to protect from the heavy monsoon rainfalls. Now it is time to reclaim normal life again and give children education and abilities to meet the future.

“Thus, we are beginning on a project to rebuild and reopen schools, starting with Sunkani-Rathankot district where we will build a new school to replace the one which was destroyed.

“I have received plans for the school house and the villagers are very eager to help and do as much work as possible themselves. For them, many of them are illiterate, it is the highest priority to give their children education and an ability to support their parents when they get old. And also to keep the village alive and give future generations an opportunity to survive in Nepal, not being forced by poverty to go and work under slave-like conditions in the Gulf states or elsewhere, as so common today.”

Thank you all so much for helping to make this possible!
With love, Deva & Miten, and Manose